New artists on cropart.com. James Buhler and Lisa Legge. Click on the picture for a closer view. Click on their names to see more work. 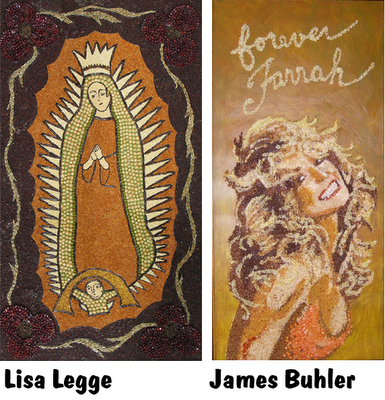 Posted by David Steinlicht at 2:09 PM No comments: 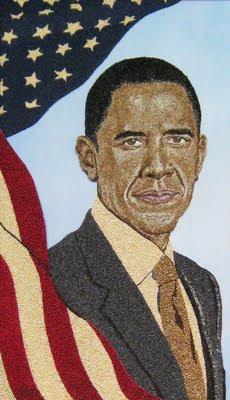 Posted by David Steinlicht at 10:57 PM No comments:

Alan Carpenter returned in triumph to the State Fair this year -- with more first ladies. What seeds did he use? Find out at cropart.com. 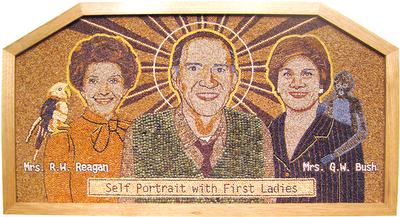 Posted by David Steinlicht at 10:09 AM No comments:

The blog post, by Mark Olson on the Chaska Herald Website, talks about politics in the Crop Art exhibit/competition. But, unlike all the other articles I've seen this year, Mark mentions every single political piece of seed art. From the Bachmans to the Wall Street Bull. Good job!
Posted by David Steinlicht at 11:29 PM No comments:

[Here’s a review of this year’s State Fair show that I received from Craig Anderson, thought you might enjoy reading it. --D.S.]

In past years a small but growing audience has taken in the annual show of crop art at the Minnesota State Fair. The 2009 show, now on display in the Agriculture/Horticulture Building on the fairgrounds, not only satisfies the crop art lover but also provides new evidence of the development of what has been generally considered a rather primitive craft into a true art form.

Crop art involves the utilization of plant material as the medium in creation of a visual work. The most common crop art technique is mosaic, using grains and seeds as the medium. Crop artists continue however to develop the technical aspects of the form through utilization of non-seed materials such as leaves, petals and stems, and in the creation of three dimensional works.

Portraiture in particular displays the developing refinement of the crop art form, as artists continue to achieve greater levels of realism and nuance. The works of Lillian Colton, an early master of crop art portraiture, and whose collection is featured in this year’s show, continue to inspire and challenge new artists. The winner of this year’s best of show award, a portrait of a girl by Zambian artist Obrien Shipeka, displays an emotional quality that transcends even the technical virtuosity of Colton’s work.

An interesting sub-genre of crop art portraiture seems to have emerged that might be called the ‘popular goddess’ portrait. The piece ‘Forever Farrah’ (James Buhler, artist) is a lovingly rendered take on the Farrah Fawcett sex angel poster from the 1970’s. And then there’s the muscular Elsie-the-cow look alike with the ‘Mom’ tattoo on her arm (Skippy Winski, artist); not really a portrait, but clearly a goddess in the Hathor/Venus of Willendorf tradition.

The most intriguing work though has to be ‘Flo’, a portrait rendered in seed of the pervasive Progressive car insurance ad character. If some savvy museum curator were to display this piece next to artist David Steinlicht’s artistic alter ego Roy Lichtenstein’s ‘Girl with Hair Ribbon’, the effect would certainly be to enhance the stature of this local crop artist (and perhaps bring down a notch the famous 1960’s pop artist). This clever work is like the spitball shot by a rowdy kid in the back of the classroom that lands squarely on the face of his teacher.

Crop art subject matter has traditionally reflected themes of patriotism, religiosity and other conservative values commonly associated with ‘rural folk’. However in recent years political commentary has emerged as a popular crop art theme. These works address current politics and issues with a distinct point of view that might even be considered a tad bit subversive, at least by ‘Minnesota nice’ standards.

Take for example the piece ‘GOP Sideshow’ by Minneapolis artist Teresa Anderson. This polemic presents a freak show triptych including Michelle Bachmann as a medium who sees only communist threats in her crystal ball; a cross-dressing Rush Limbaugh billed as ‘World’s Biggest Ego / World’s Thinnest Skin’; and Ann Coulter as Anna Conda, the snake lady. Minnesota Representative Michelle Bachmann (R) has the dubious honor of being featured in several crop art works this year. If you assume that serious ‘artists’ tend toward left-of-center politics then this year’s show is proof that many of them have taken up tweezers and seed. [Just a picky note: Crop artists usually don't use tweezers to manipulate the seeds. Just toothpicks with a dot of glue on the end. -- D.S.]

Many of the new works at this year’s show display the influence of genres, themes, and movements seen in more mainstream contemporary art forms. This points to the greater sophistication that the new crop of crop artists bring to their work. Where past artists like Lillian Colton displayed the technical potential of the crop art medium, the newer artists are beginning to show its artistic potential as well. They are worth keeping on eye on at this annual Minnesota State Fair salon.

(The 2009 Minnesota State Fair crop art show is on display from August 27 to September 7 in the Agriculture/Horticulture Building on the fairgrounds.)

Posted by David Steinlicht at 11:42 AM No comments:

An article in Sunday's St. Paul Pioneer Press (online at twincities.com) tells the background of this year's best in show winner. A piece in the out-of-state category, from way out of state -- Zambia. The craftsmanship is amazing. Click picture for a closer view. 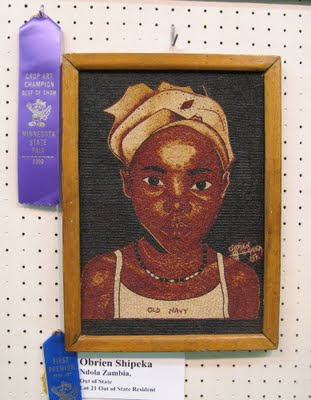 Posted by David Steinlicht at 10:40 AM No comments:

Link to the Maddow show video.

Link to the Independent article.

UPDATE: There's a mention of political crop art over at minnpost.com.
Posted by David Steinlicht at 10:47 AM No comments: