Steps in creating my Conan O'Brien crop art for 2009:

1. I thought of an idea and drew out a rough sketch. I chose Conan because he promised to bring his show to the Minnesota State Fair for a week if he got his weight in chocolate-covered bacon, then he changed his mind. This way, Conan is still at the fair (so to speak), plus I used the word "shtick" in the title because it's a synonym for a comedy bit. 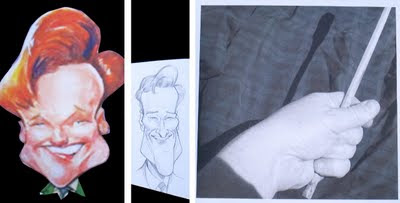 2. I searched the Internet for some photos, cartoons, and caricatures of Conan to use as a guide when drawing out my design.

3. I wanted to include a hand holding the stick Conan's on, so I took a photo of my own hand holding a wooden spoon handle to use as a reference.

4. I painted an undercoat of flesh-colored acrylic paint where Conan's head and my hand would go. I glued down the background seeds radiating out from his head. I thought the red lentils spelling out the title on the bottom would be readable, but they didn't stand out enough so I ended up outlining each orangish lentil letter in black carnola seeds.

5. Two days before it was due, I had most of the lettering done and was still trying to decide how to put the detail in Conan's face to get a semi-close likeness. (I was also working on my Michele Bachmann "Patron Saint of Wingnuts" crop art at the same time and had to switch back and forth between the two pieces while sections of each dried.)

6. After I finished, I sprayed Conan with two coats of quick-drying polyurethane clear glossy spray a couple of hours before it was due at the Ag-Hort building. I put it in a frame and attached the hanging wire and legend card. Then it was off to the fair with a couple of hours to spare.
Posted by David Steinlicht at 12:38 PM